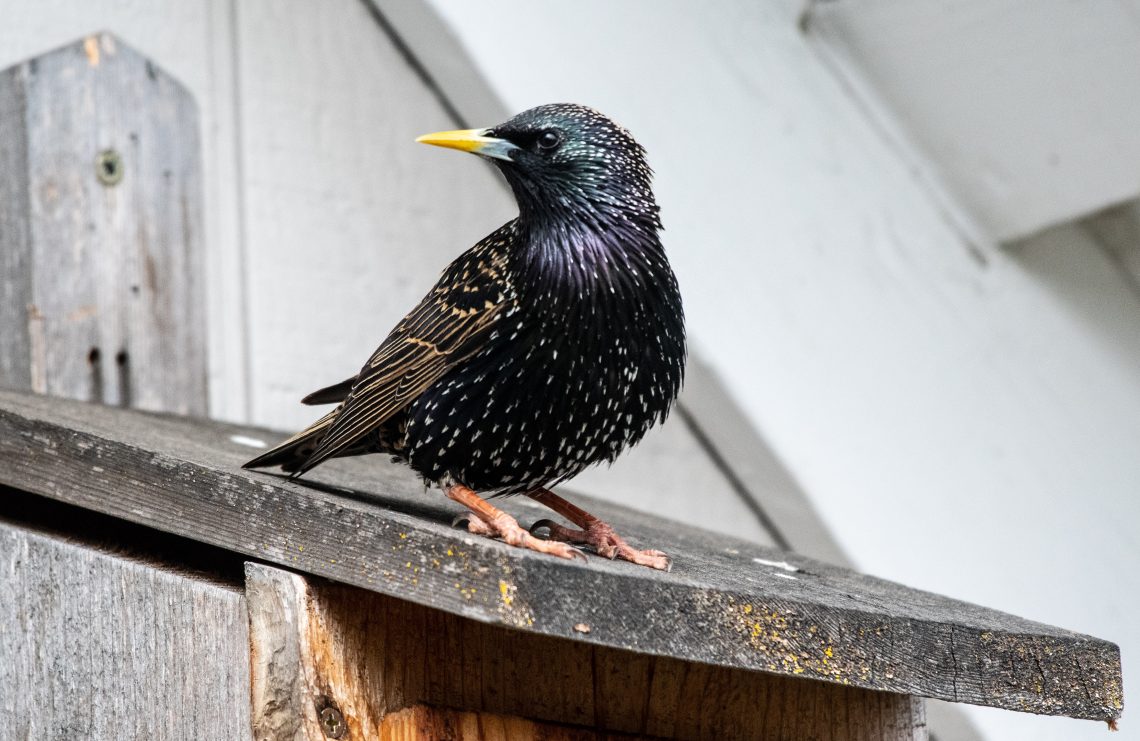 Murmuration. I’m not sure what caught my attention first — the word or the birds. It was probably the massive flocks of birds looping and swirling like leaves in the fall or, even better, meeting  them when autumn breezes decide to tease the fallen. Their merger brings to mind the trompe l’oeil of an Escher drawing: initially simple in appearance but complex in execution. 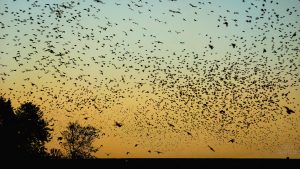 I’m always excited to discover special words like the ones for the smell of a good book or the earth following a rainstorm. There’s a richness and a profound sense of satisfaction knowing our language can be plumbed deeper for both additional breadth and precision, simultaneous feelings of excitement and calm. (There’s probably a word for that, too.)

But back to the birds. I knew there was an intriguing swarming behavior known as murmuration. What I did not realize is the same juicy word also applies to a flock of starlings, as in “A flock of starlings is called a murmuration.” Not to be completely irreverent but is this another chicken and egg question? Are starlings defined by their movement or is it the other way around? And would anyone else like to believe their name means “little stars?”

A Murmuration was Massing

Time recently spent back in NewEngland reminded me about these massive flocks and their intriguing ways. On behalf of a friend working on a special writing project, I made an effort to notice as many starling behaviors as possible. When the weather started to cool I watched them collect on perches high in nearby trees. Stepping out to wander the orchards and fields, I heard loud, busy bird chattering high overhead. A murmuration (the flock not the flight pattern) was massing high above me in the trees bordering a large pasture, a perch that gave a clear view of the surroundings. Loud, persistent chit chat appropriate to the neighboring small town. Their sound is excited and extroverted as it should be: their way of moving is among nature’s greatest and loveliest shows. 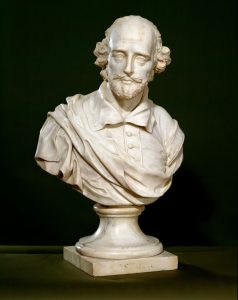 And like so many great shows, we perhaps get to see this one courtesy of the famed author and dramatist, Bill Shakespeare. At least that’s one of the rumors attached to the history of the common starling in this country.

In the late 1800’s members of the American Acclimatization Society reportedly tried to bring every bird mentioned in the works of William Shakespeare to live in North America. As it turns out, the common starling is the kudzu of the bird world: five dozen European starlings released into Central Park led to their current enormous population. This is an eventuality some consider an unfortunate nuisance. Others call it an environmental disaster. Apparently these intriguing creatures now number almost a billion and are blamed for causing millions of dollars in agricultural damage every year. Falcons and dogs have both been hired to eliminate (or at least move) some of the avian felons.

But the murmurations I observe are not a nuisance as much as a source of intrigue and fascination. Energetic and sociable, covering the nearby treetops, the starlings chitter away. Loud and raspy, an insistent squawking cacophony. These are not descriptions of a song that suburban birders want to attract to their backyards and the lack of what most would call a sweet or inspiring song may be the real reason starlings are so unpopular.

I would argue that theirs is a different sort of song, rare and revealed only when the timing is absolutely correct. As you might imagine, there is not much that intimidates a large flock perched far above their neighbors. Dogs barking, trucks moving, humans hollering to one another are all easily ignored. They wait. And upon receiving some sort of invisible, inaudible signal they leave and in the process create a  sound much like a sudden but muffled clap of thunder. Unlike thunder, the sound lingers until the entire group has been launched to their exotic dance.

Is the Romance in the Mystery?

Most would agree there’s romance in a mystery yet much of the reading about these odd, inquisitive birds is far from romantic. And because these so-called bully birds are technically non-native, there are all kinds of domestic terror tactics that humans have unleashed on them: sonic blasts with aggressive percussion, recorded hawk sounds, covering all available fruit trees and eliminating other available food sources. It seems a shame. Starlings are a social species, easily sharing space with one another —  even in breeding season. 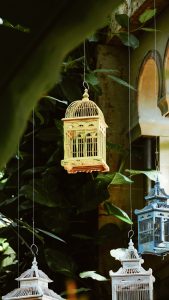 But sometimes research uncovers a greater measure of romance in a story. There was a time that starlings were domesticated and even sold in shops. A talent for mimicry combined with innate curiosity made them easy to train and led to the nickname “the poor man’s dog.” Mozart’s pet starling is said to have been able to sing a portion of one of his piano concertos. (Even my dogs can’t do that.)

But how does murmuration (the movement not the flock) really work?  How do these massive groups manage to move in such beautiful, dramatic patterns seamlessly changing direction and speed? Their movement is clearly organized regardless of the size of the flock so that when one bird makes a change, the others do so, too, creating this stunning, visual harmony.  Apparently this occurs because each bird consistently coordinates its movements with the seven nearest neighbors.

Murmuration is Simply a Neighborhood Watch?

Perhaps the real mystery here is the simplicity and, oddly, the familiarity of such an operation. Most adult humans have a handful of friends: two or three from their early years and another five they spend time with. Within neighborhoods, most of us are best acquainted with the people geographically closest to us. So, much like the starlings, our movements for holidays are coordinated with our closest family members while norms around holiday decor, political signs,  or trick-or-treating are strongly influenced by the guy across the street. Our dance might not be pretty but we watch and adjust to create some sort of harmony.

In the human experience balance can be easily lost, leaving us swinging between poles: joy vs. grief, intimacy vs. isolation, and safety vs. danger. Seeing the natural world disguise order with chaos may give us hope to hang on a little longer.

I’m always excited to discover special words like the ones for the smell of a good book or the earth following a rainstorm. Click To Tweet

Our Friend Oscar and His Inner Critic