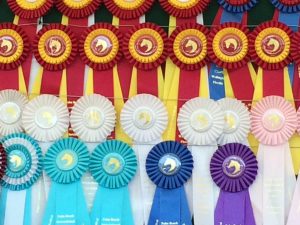 When I was 5 I lived on a farm with an incorrigible shetland pony named Ginger. He was not a fan of the saddle but was reasonably trustworthy when pulling a cart. We were entered in a local horse show where I drove the heck out of that pony cart.

Lined up at the center of the ring for pinning of ribbons, the unthinkable happened: other teams got the blue, red and yellow ribbons. Undeterred, my pony and I waited patiently for the judges to return with our gigantic trophy. Eventually one of my parents had to lead us out of the gate. (This may also have been the year a pair of Dalmatians wandered onto the farm: I was certain Pongo and Purdita had arrived …and that 99 puppies couldn’t be far behind.)

And that, my friends, is me in a nutshell.

I live in the land of “what if” — kind of like a laboratory full of ideas with vials, burners and smoke. Sometimes that’s a very good thing.

Sometimes there’s an explosion in the lab.

Other people don’t always see things quite the way I do, and, if something doesn’t work? I am ridiculously confident it’s only because there’s a better answer available. I don’t quit. Some say I had (have?) an over-active imagination. I prefer to think of it as chronic curiosity mixed with a bit of creativity and a stubborn refusal to fail. A passion for writing — in almost any form — keeps the dots connected.

What if  everyone is only one good idea away from a better life?

So that’s where the blog and the books come from: about 3 decades of launching ideas and helping people get unstuck. Whether as an addictions therapist, domestic violence advocate, ghostwriter, trainer, or author: I love sharing ideas to help people move from where they are to where they want to be.

After all, it only takes one. One good idea.