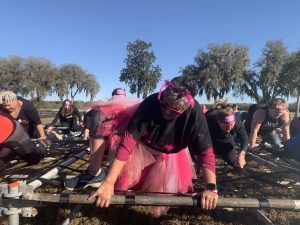 A mud run. Who would want to do such a thing? Or, on a more personal note, what achey, arthritic, overweight oldish woman would consider something so foolish? After all, isn’t it dangerous? Doesn’t that mud get slippery? And what about the obstacles? Or broken bones?

Hard to believe that it has been only about two weeks since since I finished my first — and most likely last — 5K mud run. As I’ve said to several friends, there was actually a lot more walking and whining than running going on. Still, it was an event for which I signed up, suited up, and showed up. And, as often happens, I’m getting ahead of myself.

Parts of last year were not especially kind to me. Surgeries, both planned and emergency, were helpful in some areas but set me quite far back in others. Despite hours of physical therapy, meditation, chiropractic care, yoga, and numerous other health-enhancing activities, I just couldn’t get right. Then, the orthopedist uncovered a fairly serious but as yet untreated injury: that did quite a number on my head. 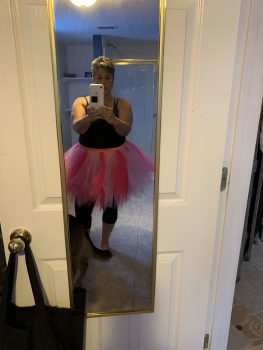 Of course there were joyful events, too: the arrival of a puppy named Brava was closely followed by the birth of a new baby grand boy. I’m clearly over the moon (and beyond) about the human baby. However, since I’ve promised his daddy I wouldn’t write about him here, you’re stuck with hearing about the puppy. I’m unwilling to sit on the sidelines of either of their lives and have a strong desire to do all the things that good grandmothers and decent dog handlers do, so pain management and improved health became a priority. That’s where the mud comes in.

A friend on the other side of the state posted about signing up for a Mud Girl Run. I was intrigued, followed some links and learned there would be one in Jacksonville — and that it conflicted with my island book festival responsibilities. So I contacted my friend in Tampa. She added two of us to her team. 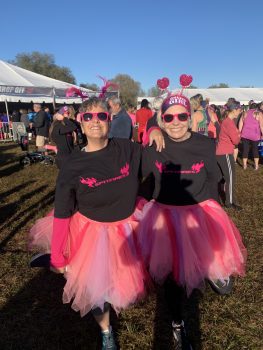 With 5 months to prepare, I stepped up the pain management practices —  dropping some turning up the volume others. When exercising, I dug a little bit deeper to find that line between pushing and re-injuring myself. A few weeks before the race, my friend and travel partner dropped out of the event. Her decision gave me an out; instead I used it to strengthen my commitment to myself and move forward with adventure in the mud. Two days before the run, she decided to take the trip with me. And bring her stuff. On the way over, we committed to sticking together, going slowly if necessary, laughing at ourselves… and finishing. We were both as ready as we could be.

I don’t think mi amiga en Tampa would be offended if I described her as a kooky, busy, joyful genius — a mom with lively kids and a full time job. In our limited pre-race communication, she assured me that I’d fit in with the rest of the team and that the goal of the exercise was to have fun. And, by the way, there would be team T-shirts. And tutus. Clearly, most of our team members were more concerned with fun and fashion than finish times. Thank goodness.

We bought the damned tutus. I took a picture when it arrived — I’m still working on being comfortable in my new, larger sized body. But being fat-shamed on the internet is far from the worst thing I’ve ever experienced in life. 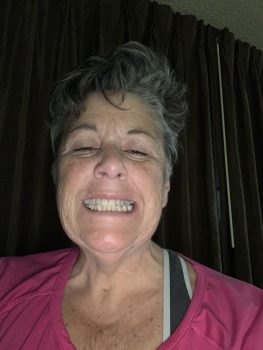 An uneventful drive across the state culminated in a reunion with my lovely Tampa friend. It took her about 45 seconds to fold my other friend into her family. My friends are like that. Once we got the schedule for the next day ironed out we decided to call in a night. 5:00 am comes early. With only really bad hotel room coffee available, this is my 5:00 am face.

The morning of the event (I still can’t bring myself to refer to it as a “race”) we connected with the rest of the team and were driven to the venue. Various women worried about different parts of the challenge but not one of us was truly prepared for the biggest potential foe of them all: the weather. Yes, we were all prepared for mud and moisture but the 39 degree temperature was a bit daunting. Hey   — at least it made us all anxious to get moving, right?

Lesson 4 ~ Silver linings are worth their weight in gold.

We stretched and bounced and paced while waiting for our start time. Soon enough we were underway. The course was located on a spectacular farm, winding on gentle grades through spacious pastures. Perfect blue sky. Sun. And the obstacles. Cargo nets and water hazards.

Over and under, crawling and climbing, tripping and sliding. Women reaching forward and back to help one another stay upright and to keep track of our shoes. We laughed and shrieked and swore and growled. We were uninhibited and powerful. We crossed the finish line holding hands, passed our tutus on to an admiring group as they were preparing to race, and headed to the parking lot to towel off, put on something dry, and choose a place for breakfast.

Over pots of coffee, we celebrated our good fortune and gave thanks… for sisterhood and the power of crazy ideas.

5 Ways to Struggle Less with Humility