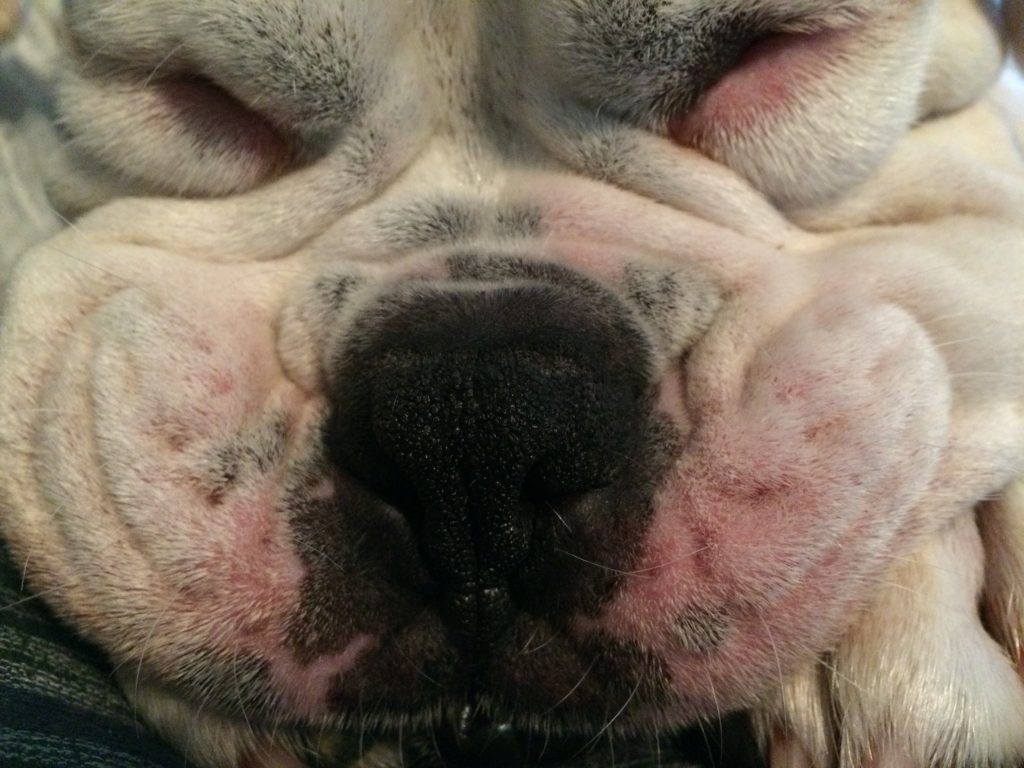 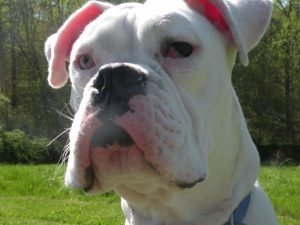 I didn’t think much about naming when I first saw the white boxer on a pet adoption site. He was called Roo — as in Winnie-the-Pooh’s friend from the Hundred Acre Wood. While it was cute, he had quite an elaborate and layered personality — one that moved way beyond cute. Roo just did not seem to be a good fit for such a strong, muscular young pup.

In addition, this dog had been born deaf. For some reason that contributed to doing more than my usual amount of overthinking. For example, although I could call him Herbie today and Winston next week, this little dog needed a name to suit his stunning appearance and oversized attitude. Besides, the veterinarian’s office would probably have a tough time marking a medical file with a picture of a name sign.

Oddly enough, I’m usually pretty good at naming — although when it comes to a name for a new member of the family, it always feels somewhat daunting. Unfortunately, this is a super power that kicks in when I don’t need it. Since I felt uncharacteristic pressure and  couldn’t come up with the right answer for this special naming, I did what I do when I need a lot of input: I turned to social media. Posting his picture on my Facebook author page, I asked for name suggestions, and got all kinds of good ideas.

Then something weird happened.

In addition to my social media survey, I posed the question to three important, animal-loving yet dogless kids in my life: a niece, a nephew, and my German stepson. Each of the three kids responded with a list of 5 or 6 name suggestions. There was nothing weird about that, right? 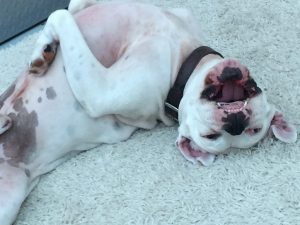 The weirdness and the goosebumps kicked in when I saw a unanimous choice. These kids had not talked with one another about their lists but each of the three lists contained the name Alex. So there it was. An easy choice. And his name sign is a peace sign. Because…  just because. What old hippie doesn’t like to flash a peace sign every opportunity they get? (It’s also easy to move from my made-up ‘Alex’ sign to the often used ‘look at me’ sign.) 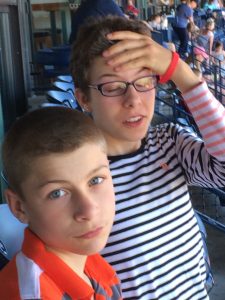 Why are names so important? I think they carry an energy that encourages us to behave in a certain manner. A name can reflect a personality. Or shape an identity. I loved the suggestions from friends and strangers via Facebook. And I knew it was important to ask the kids — especially since I had a tradition of taking pictures of my niece and nephew modeling their “kid without a dog” faces. Naming Alex gave them all a bit of ownership. (The relationship between naming and ownership is something I wrote about in The Inner Critic Advantage.)

But more than the actual naming, this story reminds me to trust my process. Some parts of it — like intuition — come easily but, as important as it is, you probably shouldn’t ask me where patience fits into my creative process. And, by its very nature, we can’t get serendipity to show up on demand.

Somehow we have managed to come full circle. Alex is in the process of recovering from some medical issues that caused him to lose his usually robust appetite — and a lot of weight. (‘Robust’ is an understatement. Seriously, the guy eats like a pair of labrador retrievers.) We got him to resume eating and he is packing on the pounds. In fact, staying on the family farm, it seems we have made it all the way back to the Hundred Acre Wood — except this time we are with a “Piglet.”

Facing Fear: A New Question for That Voice in Our Heads