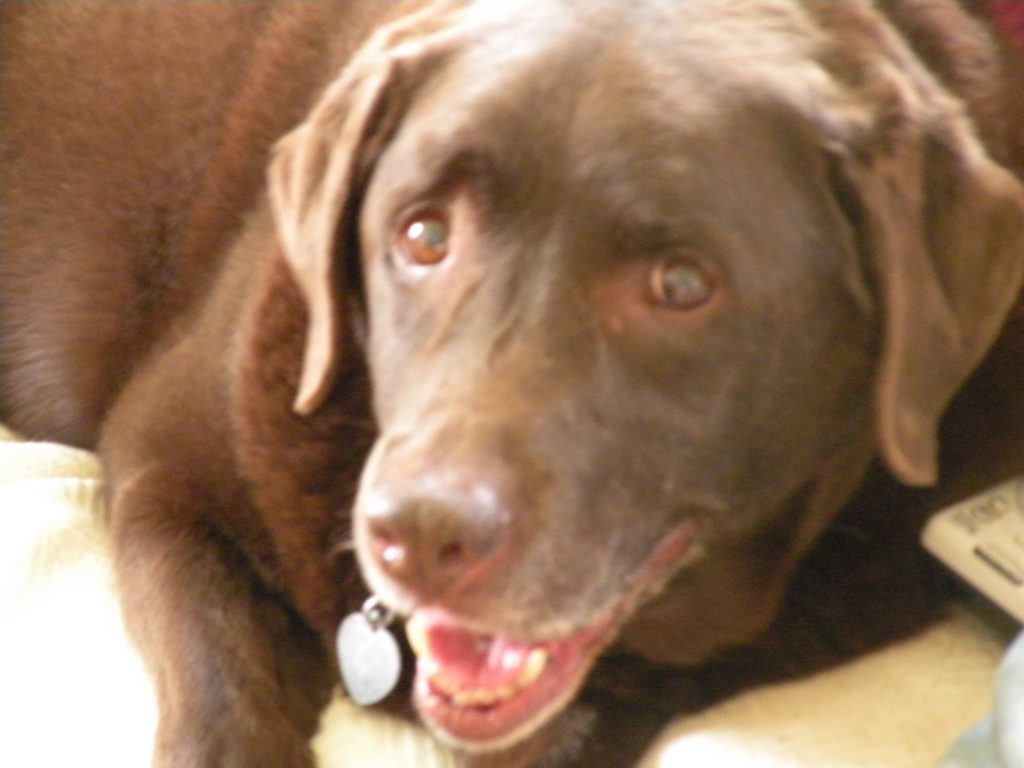 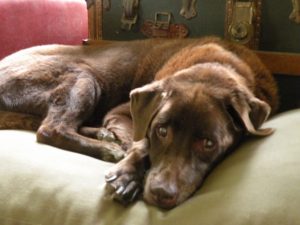 Several years ago a dumpy, dusty, goofy, middle-aged Labrador Retriever came to live with us. (Picture the dog version of the Pigpen, the character in the Peanuts cartoon.) This goofy, obnoxious little dog came into rescue because his breeder was an irresponsible jerk. No fence. No leash — the little brown dog kept wandering. At the age of 7, after too many “come bail him out” calls from the animal control officer, he was dumped at the shelter. (I can’t imagine having a dog for seven years and giving him away, but that’s a story for another time.) He was quickly adopted by a daycare owner who, almost as quickly, returned him: apparently parents did not appreciate the enthusiastic greetings and beaver-like tail knocking down their kids like so many giggly bowling pins.

At the time, our favorite boarding facility also housed an all-breed animal rescue. I’m not sure where we were headed, but my husband came home from dropping the others and said, “There’s a dog I want you to meet when we get back.” So, when we returned and I was getting to know him a little, I asked him to “down.” He did — and then he rolled over. And over. I put him in the car and went in to pay his adoption fee.

His adjustment to our family was not quick or easy. It wasn’t disruptive, he just didn’t seem to be “all there.” He seemed content enough but was always in the background. Even after living happily with my husband’s Lab, I felt clueless and wondered if he was happy with us.

To say that I’m not exactly a mellow, laid-back human is an understatement. Picture me hanging out with a Rottweiler, a Doberman, a German Shepherd or a Malinois. It makes more sense: they’re driven, protective, cuddly, smart, intense, frequently under-estimated and fiercely loyal. I “get” them.

This was my third time around with a Lab and, still, I struggled to connect.  A dear friend and fellow dog lover explained it.

“A German Shepherd brain — actually, any herding dog — is a lot like yours. They’re interested in everything and just a little ‘hair trigger’ with the bark.  Sometimes they hit the sleeve or nip one of the sheep and ‘forget’ to let go.  They’ve got a work ethic that doesn’t quit. You make sense to one another. It’s intuitive and natural.  The Lab’s got you stumped because you’re trying too hard.  He’s really not trying to decide whether to retrieve, herd or guard…. He’s only got two thoughts for you.” 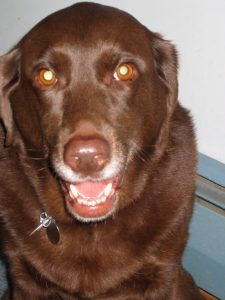 She laughed at me before responding.  “I love you. What’s to eat?”

So I started trying to think of him as everyone’s favorite underachieving stoner cousin.  I started calling him “dude.” Pictured him in a Hawaiian shirt and a recliner chair. He started wagging his tail in his sleep and barking to let me know when he needed middle of the night attention.  Slowly but surely we fell in love.

I started calling him “dude.” Pictured him in a Hawaiian shirt and a recliner chair. Click To Tweet

And I’m so glad.  You see, he has succeeded in accomplishing something nobody else has ever managed.  He’s teaching me to be more Lab-like.

All love, all the time.  And it’s just delicious.

When in the Course of Human Events it Becomes Necessary