Wow. Hurricane Dorian. I didn’t see that one coming! Actually, I did. We all did. The arrival of this slow-moving hunka-hunka swirling air has had more attention than Taylor Swift and the Kardashians combined. (Wait ~ are they still a thing? I’ve lost track.)

With apologies to those actually impacted* here’s a bit of a silly take on the unseen side of hurricane impact.

Favorite Husband and I were on a road trip when we started hearing about a hurricane that could pose a serious threat to Florida and Floridians. So we came home a few days early. Not entirely sure what we thought we could or would accomplish but it felt like the right thing to do. Oh, and our son is scheduled to come home from Paris later this week. Based solely on the quantity of email I’m receiving? The airline thinks he should change plans.

We thought by coming back home we’d be in a great position to straighten up the backyard a bit, throw a few things in a suitcase, and laugh at ourselves a little. But there’s a hitch or several. Gardening. Swimming. Dogs. Do you have any idea how much STUFF can accumulate in a back yard?  Straighten up a little? My Aunt Fanny! Where’s Marie Kondo when you need her?

Hey — it’s Florida. Just because it’s in the left lane with its blinker on, doesn’t mean this #hurricane is going to make a turn! #HurricaneDorian #humorhelps Click To Tweet 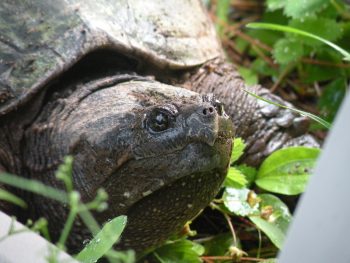 After packing the van for 3 dogs on 3 different diets and loading a enough books to get us through an open-ended trip, the human suitcases ended up a little skinny. I wonder how many days I can survive in yoga pants and T-shirts? I think I’m grateful that I’ll probably never see the other hotel guests again.

Hurry up and wait. When a #hurricane is moving this slowly I feel like I’m being stalked by a turtle. A rabid turtle. Click To Tweet

I can’t think of anything more humbling than the immense power of nature. Despite satellites and storm chasers and pasta-on-parade aka spaghetti models, humans don’t know as much as we would like to about these massive storms. Strength. Duration. Path. Who knows? Not me. Respect.

This is already not one of my superpowers. While I obsess about cleanliness, I’m a bit of a train wreck when it comes to neatness. So as we packed and prepared, I collected my project piles (or as I call them ‘stacks of brilliance’) and put them into a waterproof bin. I put the bin on a table. When Favorite Husband saw what I was doing he made the mistake of telling me that he didn’t think the water would come up. “No one ever does, do they?” I thought, as I wandered from room to room stacking things on top of one another. Can’t wait to go home to that!

Our two grown-up dogs are experienced travelers and wonderful hotel guests but our puppy was a total unknown. The wild child’s reactions to new situations can be a bit of a wildcard. So guess who’s adapting to hotel life? The little princessa is taking her cues from the big dogs and, just like at home, she crates herself when she’s not sure what to do. Everybody’s a little clingy but we’ve established an ‘on the road’ routine. 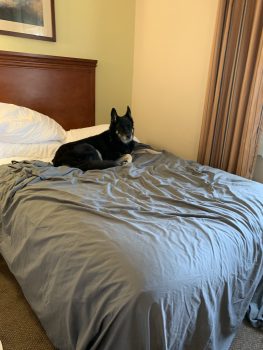 I’m just in from the last dog walk of the night. (I’m getting most of my steps in!) In the parking lot of a dog-embracing Candlewood Suites in Georgia are several bucket trucks from an electric company in Virginia. They’re waiting to be deployed… to restore power further south.

Thanks to a dear friend (who also knows a lot more about hurricane weather than I do) we had Plan A, Plan B, and Plan C. She reserved two rooms out of harm’s way in one direction and I did the same in another. And, believe it or not, waiting, watching and staying put was an option. We picked a plan, released some rooms and launched our little caravan. During our trip through thousands of acres of beautiful farms, we received texts and calls and tweets with information and support.

Perhaps that can be a new metric. A stormful. And getting a stormful of love from family and friends is as humbling as a record-setting hurricane. And much more powerful.

How You Can Help

*On a serious note, we are heartbroken about the hurricane damage in the Bahamas. But Chef Jose´ Andre´s and his World Central Kitchen are already on the way to Abaco. They do an amazing job feeding hungry people during disasters.

An excerpt from the first response efforts reported by wftv.com: