Can you define “Inner Critic” without using the words “inside” and “criticism“?

The Inner Critic seems to have found a place in popular culture.  Most of us ‘know it when we see it,’  (or ‘hear’ it).  When I started looking through others’ definitions, I found that most used some form of the words “inside” and “criticism.” 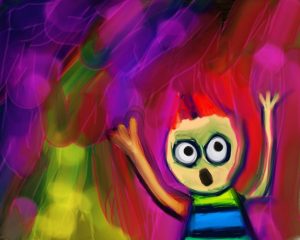 I could picture many favorite English teachers giving “the look” to anyone brave or foolish enough to try to define  word by using that same word.  Hmmm… some of those faces look an awful lot like the “Inner Critic” living in my brain…. but… I wander.

I decided to try to create a definition of  the term “Inner Critic.”my own.     For now I’ve settled on this:

An “inner critic”is a misinterpretation or distortion of ordinary stimulus or data that:

Editing as I go…  working without a net… Is that better?

[Tweet “Editing as I go, working without a net….”]

On the other hand, while good definitions are scarce, a web search will offer myriad descriptions and examples of the impact an unmanaged Inner Critic can have on an individual and her (or his) goals.  More often than not, authors are offering to help readers “silence,” “destroy,” or “eradicate” their Inner Critics…  I’m not sure that’s the way to go.  In fact,  I think some of those tactics make it even stronger.

[Tweet “I’ve opted for a kinder, gentler relationship with “that voice” & my Inner Critic seems to be responding”]

I’ve opted for a kinder, gentler relationship with “that voice” and my Inner Critic seems to be responding in kind.  It seems to be morphing into a watchful friend…. and I like the way that feels.

How are you and your Inner Critic treating one another these days?

12 Responses to “How Do You Define “Inner Critic””