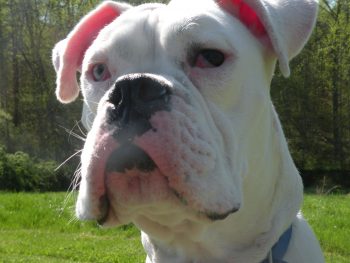 Roo. That’s what he was called. Roo as in Winnie-the-Pooh’s friend from the Hundred Acre Wood. It was a cute name but one that did not seem a good fit for such a strong, muscular young pup.

Choosing the right dog name is always a little daunting. One or two syllables, easily fitting with commands. Easy to yell when you’re recalling him. And there are other factors as well. A long time ago a breeder advised me to “never call a dog something you don’t want it to be.” That both makes sense and reminds me of a cartoon panel in which two dogs are introducing themselves. One says, “I’m Ginger.” The other, “My name is No, No, Bad Dog.”

In addition, Alex was born deaf and  I found myself doing more than my usual amount of overthinking. On one hand I could call him Herbie one day and Winston the next. After all, “a rose by any other name would smell as sweet,” right? (Favorite Husband does that. But he does that with all of us.) On the other hand, this little dog needed a title to suit his stunning appearance and oversized attitude. Besides, I didn’t think it was fair to ask the veterinarian’s office to label his medical file with a name sign.

Like so many of my writer friends I have occasional moments of brilliance — at least with names and titles. Typically I really shine when I don’t need such a thing. (Yep, that’s right, random titles just show up. Especially when I’m not working on anything significant.) When I couldn’t come up with the right answer for this one, I turned to social media. I posted the boxer’s picture on my author page, asked for name suggestions, and got all kinds of good ideas. Then something weird happened. 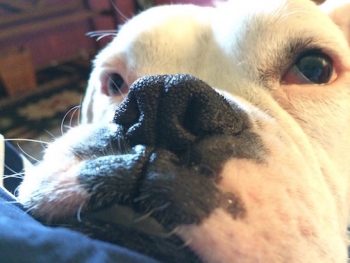 In addition to my social media survey, I had posed the question to three animal-loving yet dogless kids in my life: a niece, a nephew, and my stepson in Germany. Each of the three kids gave me a list of 5 or 6 proposed names. And guess what? Each of the lists had the name Alex on it. So Alex it was. And his name sign is a peace sign. Because … just because. What old hippie doesn’t like to flash a peace sign every chance they get?

Whether we’re naming children, pets, streets, or boats, a name represents something. They become a stand-in for the person, place, or thing that carries it. A symbol. There are other considerations as well:

With the recent concerted effort to improve race relations in the US, ‘offensive or hurtful’ has certainly been brought to the forefront, especially with many in favor of renaming military installations currently named for Confederate military officers.

I recently had an opportunity to speak with a large group about The Inner Critic Advantage. They enjoyed the concept of renaming “the thing in their heads” so it felt less powerful and daunting. Friendlier. It’s a bit like when the littles are acquiring language — there’s a great relief that comes with being able to name something and to communicate about it. (And I can’t think of anything or anyone that’s friendlier than my Alex.) Over the years, Alex and I have developed our own system of sign language: some obedience signs, a few from ASL, and some routine gestures.  Naming makes a thing more real — maybe friendlier. I think that has something to do with our system of communication. Name it. Claim it. Tame it.

Do you like your name? Is it easy for others to pronounce? Does it have special meaning within your family? Do you have a story about names or naming to share? I’d love to see those in the comments. Thanks!

6 Responses to “How Alex Got His Name”

Sorting and donating and storing and a cool piece

Love my #crepemyrtle They are all this incredible

Crazy #covidhair for one more day. Not the most fl