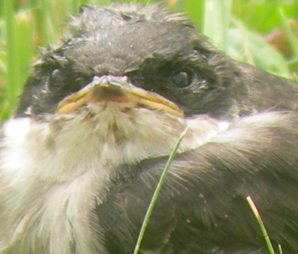 How are you going to fill in that blank???  And what’s up with the ugly little bird?

I took this picture back when we lived in northern New Hampshire.  I’d been watching a mother bird feed her little ones. Eventually, it was time for them to fly.

Only this little baby wasn’t convinced.  I’ll never know whether he didn’t WANT to fly or he wasn’t physically ready.  It probably doesn’t matter.  Somebody else had a goal for him and he didn’t achieve it.

Eventually, the others managed to redirect their flight skills.  They made it to the top of the garden fence.  And then higher up, onto a tree.  And up to the roof of the barn. Flying.  Kinda.

Except for this one.  He was on the ground, going nowhere fast. And he was not at all happy about it.

Can you relate?  I know I can.  I have (at least once in my life) managed to make myself miserable by comparing my insides to what I saw others doing.  Or, worse still, trying to reach goals I didn’t set.  I can’t think of a better way to stay  stuck on the ground than to pursue somebody else’s goals.

[Tweet “There’s no better way to stay stuck than striving for goals you didn’t set.“]

Both flying and goal achievement are a combination of science and art. Some critters don’t fly because they lack the necessary equipment.  Others haven’t developed enough strength and coordination or mastered the timing. It’s not all that different from the way humans grow into our various roles.

Whether you’re a writer, visual artist, salesperson or parent… living up to our potential requires a combination of science (skills, tools and information) and art (choosing the right combination and making them a part of what you do).  And, as much as we’d like to pretend otherwise, there’s no magic bullet.

When it comes to getting unstuck there’s no ‘one size fits all.’ What are your favorite strategies when flying looks impossible?

Feeling stuck because your #InnerCritic is saying “you can’t”?  Check out my new book The Inner Critic Advantage: Making Peace With the Noise in Your Head now available on Amazon.

15 Responses to “Flying Means Getting Off the Ground”

Sorting and donating and storing and a cool piece

Love my #crepemyrtle They are all this incredible

Crazy #covidhair for one more day. Not the most fl