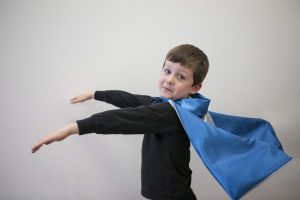 One of my guilty pleasures is giving big, tacky gifts to the pre-schoolers in my life.  I’m not talking about the latest, greatest Black Friday Cyber Monday “must have.” I’m also not talking about a ton of money. To get really big and really tacky? It’s time to think outside the box.

Of course it helps if that box is huge — either a decorated furniture box or a plastic storage bin, preferably in a fluorescent color, never to be found in nature.

[Tweet “I love giving big, tacky gifts to the preschoolers in my life.”]

Giant furniture boxes can be filled with crumpled paper or shred. The fun comes in when several small gifts (balls, packs of chalk or crayons, small bottles of bubbles, inflated balloons, candy canes) are hidden and  the little one gets burrow around, treasure hunt style. Hint: you might want to keep track of the number of “gifts” you’ve hidden so you know when the game is over and consider the “one child per box” rule.

One year, my mission took me tromping through the local thrift stores in search of plastic kitchen goods. It was a short tromp — they were plentiful. After a sterilizing cycle (or two or three) in the dishwasher, we added some kitchen mitts and had the basis for lots of real “pretend cooking.”

[Tweet “One year, my mission took me tromping thru thrift stores in search of plastic…”]

Once I got started, I discovered mesh laundry bags full of cheap sponges make a great, baby-proof building set… and stepping on stray contents in the middle of the night hurts a whole lot less than finding lost Legos.

[Tweet “It doesn’t matter as long as there’s a LOT of brightly colored stuff.”]

I love these giant gifts because the little guys get so excited. (Sometimes it’s best to open these when there are no other gifts around because the recipients tend to want to stop and dress everyone in the immediate area.) They’re also fun to assemble, relatively inexpensive and, like so many of classics, lacking only one ingredient: the child’s imagination.

The cool thing about that magic ingredient? The more you use the more you have. How’s that for a gift that keeps on giving?

Looking for recommendations for books on parenting? Here’s a start.