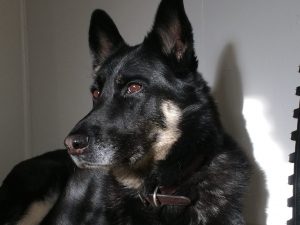 Moments before arriving, a visiting friend reminded me that her small child was afraid of  dogs… especially BIG dogs. At the time, my family included a young,  intense German Shepherd Dog and a goofy, aging Lab.  Since neither could be described as ‘small,’ I promised my friend that I would kennel them for the afternoon so her daughter’s visit would not be ruined.

[Tweet “WHAT WOULD YOU DO: A friend reminded me her visiting child was afraid of dogs. “]

Meeting for lunch before driving out to the house, I had a chance to chat with the little girl.  I explained that the dogs would bark when we arrived, that it was part of “their job.”  I also let her know they couldn’t get near her and asked her to help with their training by ignoring their noise.

Upon arrival, the dogs stopped barking almost instantly. They were intrigued.  My 5-year-old guest and I spent less than 10 minutes looking around in the barn and picking berries before she became fixated on the dogs and the kennel.

Before long she asked me if it was OK to bring them inside.  So, wearing training collars and leashes to help them pay attention, they sat quietly beside me. The grown-ups continued to talk about  ‘dog language‘ and how it is differs from ‘people language’, the way dogs rely on their noses to learn, that jumping and squealing encourage chasing, that calm behavior brings a calm response…. and that paying attention to these things can help kids stay safe.

My little friend asked if the dogs knew any tricks.  When I explained that to see one of them ‘perform’ the other would have to sit quietly beside her, the “formerly-frightened-of-big-dogs” child made my day.  She turned to her mother and said:

“Mom, these are not BIG dogs because I’m not afraid of them. I like them. These are MEDIUM dogs.”

Why is this such a favorite story?

Perhaps it’s an approach we can apply to other sources of fear.  Do you have any “dogs” that need shrinking?

8 Responses to “Big Dogs on the Brain?”